Ahh, chocolate and peanut butter…SO good together!  I was flipping through one of my cookbooks, called "9 x 13: The Pan That Can," and I saw a recipe for these brownies with a peanut butter swirl.  I just knew I had to make them! 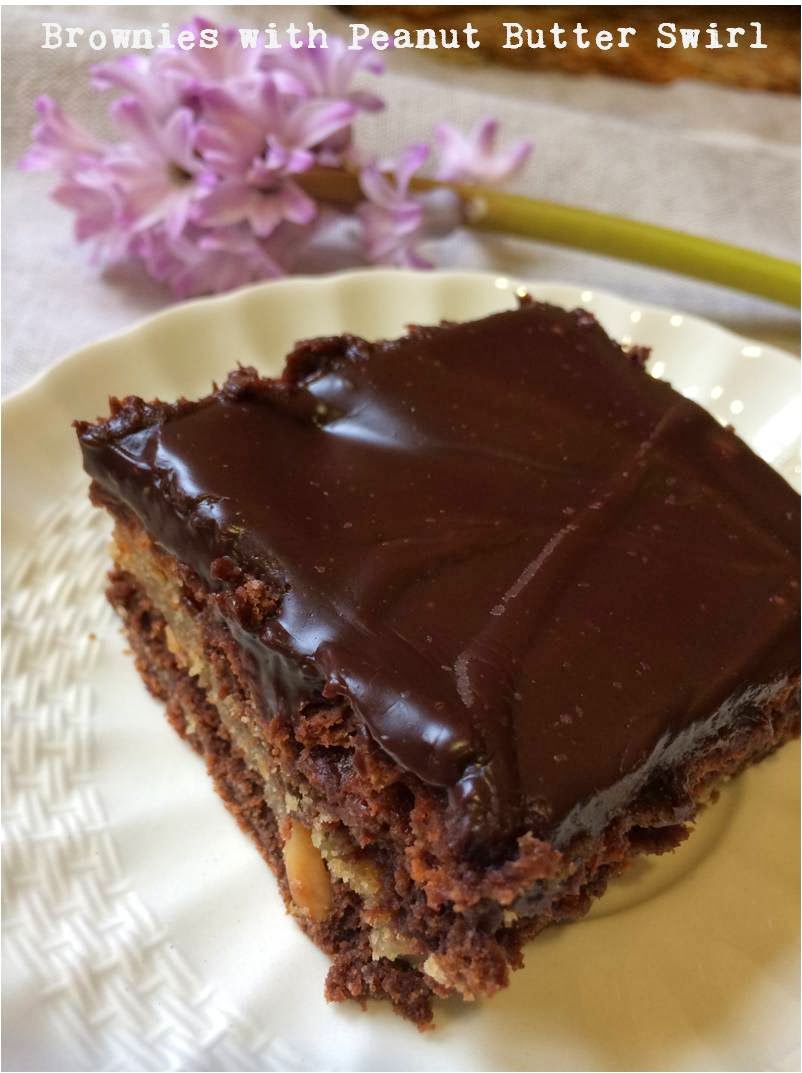 I altered the recipe a little by adding a ganache on top, because the original drizzle called for melting shortening and chocolate chips together, and that didn't sound good to me.  I also used chocolate chips instead of bar chocolate, because that's what I had on hand.  :-)

Don't be intimidated by the long list of ingredients, because it's not a hard recipe…and the final product is so rich and decadent, with a hint of that salty bite in the middle.  Yum!

Preheat your oven to 350 degrees.

Line a 9 x 13 pan with tin foil, and spray the foil with non-stick spray.  Set aside. 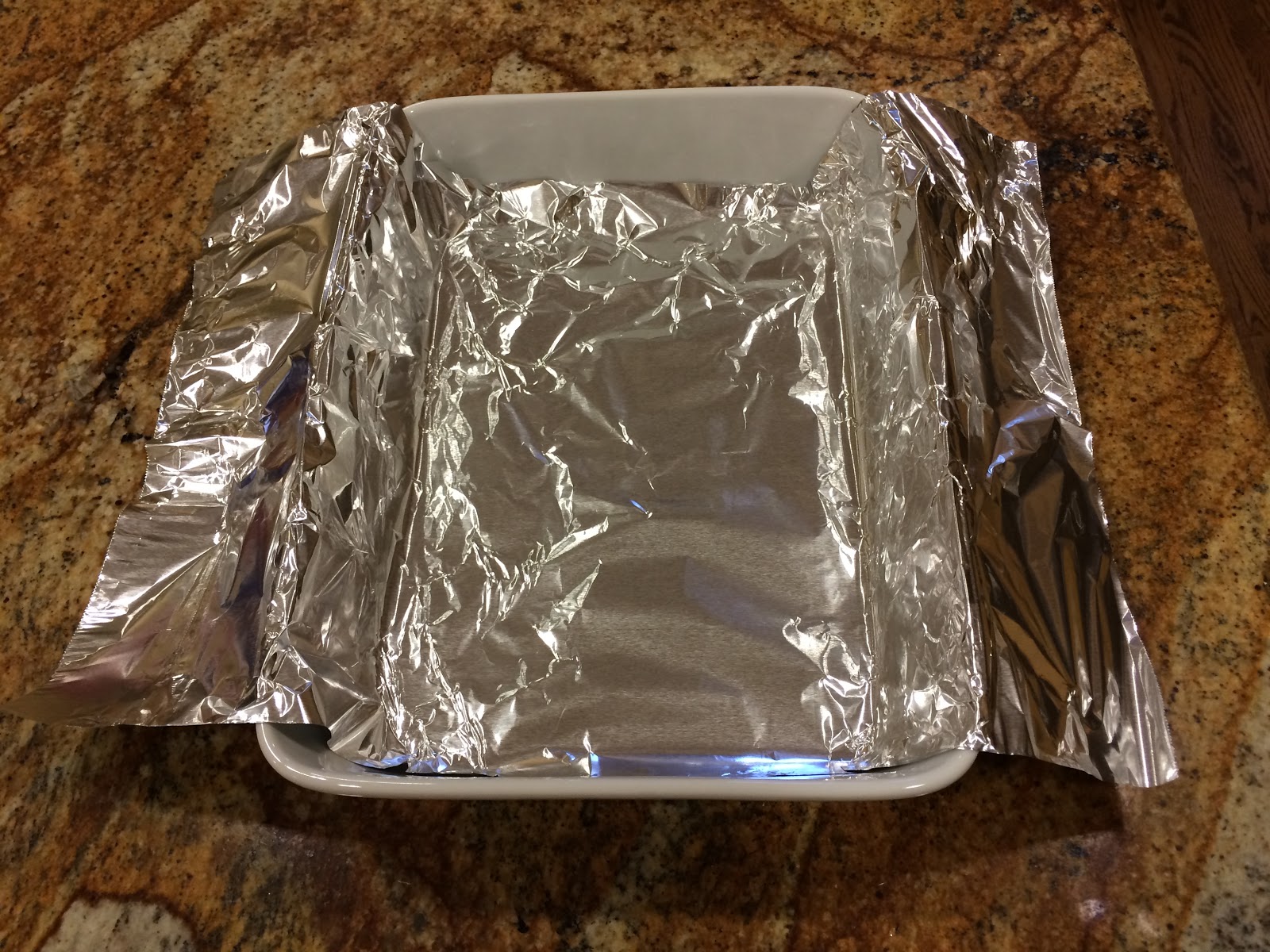 (No idea where that blue light is coming from!)

In a medium saucepan, melt the three tablespoons of butter, and add the 8 ounces of chocolate chips.  Stir until melted.  [Mixture will be fairly thick.] 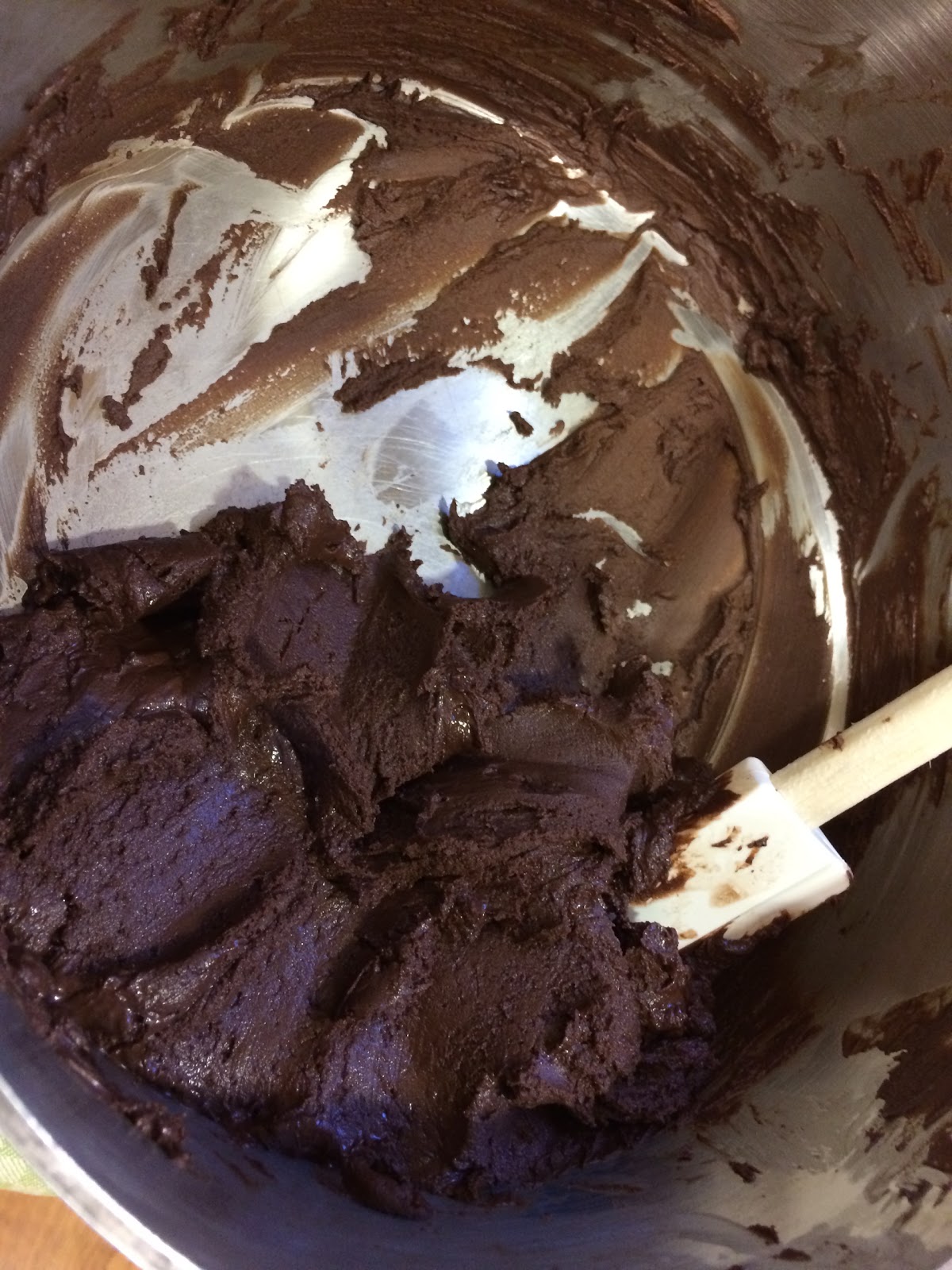 Cool the chocolate mixture for 15 minutes.

While the chocolate is cooling, beat two eggs with an electric mixer on medium for two minutes.

Add 1 and 1/4 cups of sugar, the water, and the vanilla.  Beat on medium speed for four minutes.

Beat in the cooled chocolate mixture on medium speed until well blended.

With your mixer on low, mix in the 1 cup flour, the baking powder, and the salt.

Pour half of the brownie batter in the pan and spread it evenly. 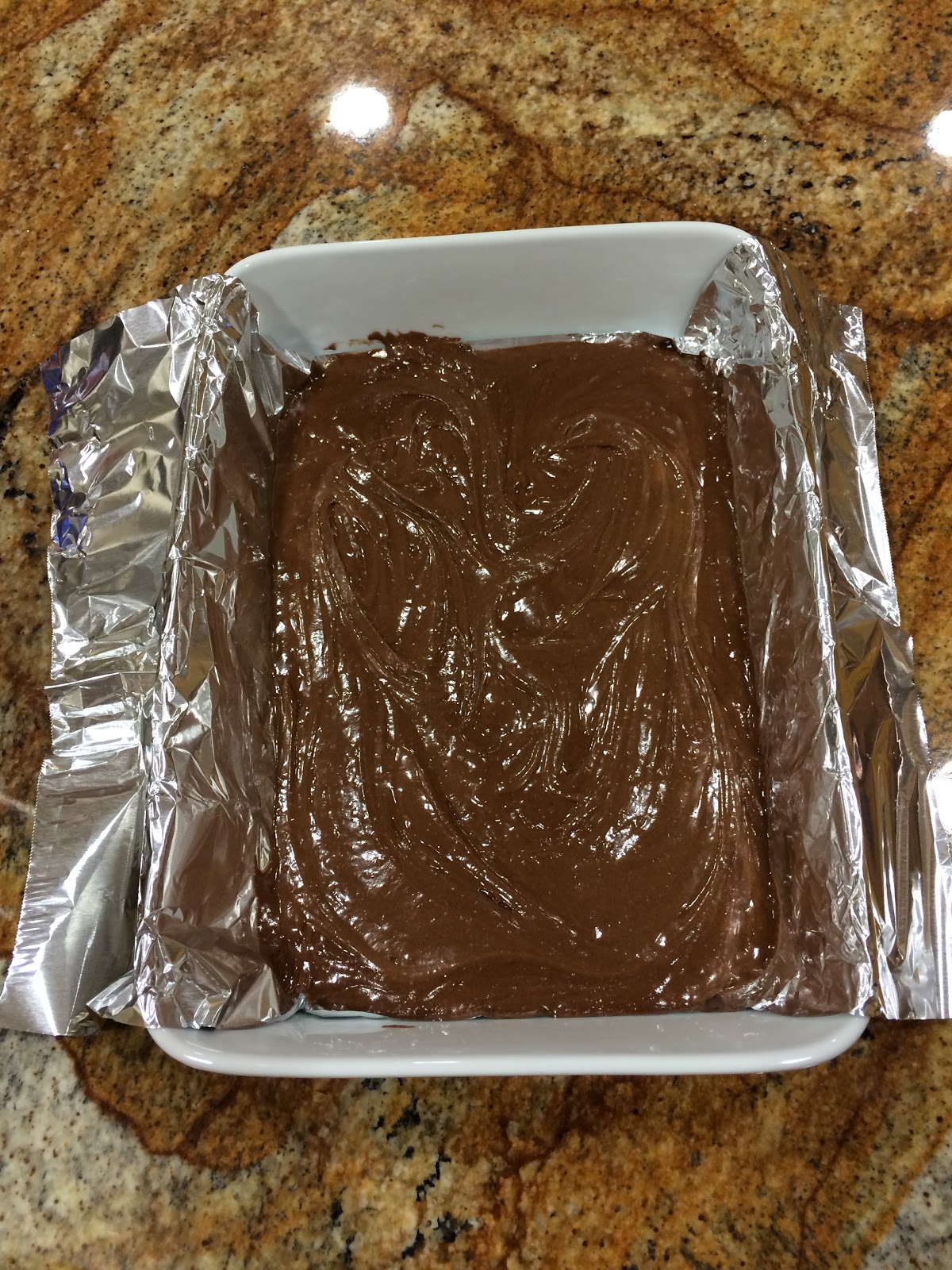 With an electric mixer on medium, beat together two eggs, 2/3 cup sugar, the softened cream cheese, the peanut butter, and the two tablespoons of flour until smooth.

Using a butter knife, swirl the batter for a marble effect.  [Note: try not to over-swirl or the effect is lost - I'm speaking from experience here!] 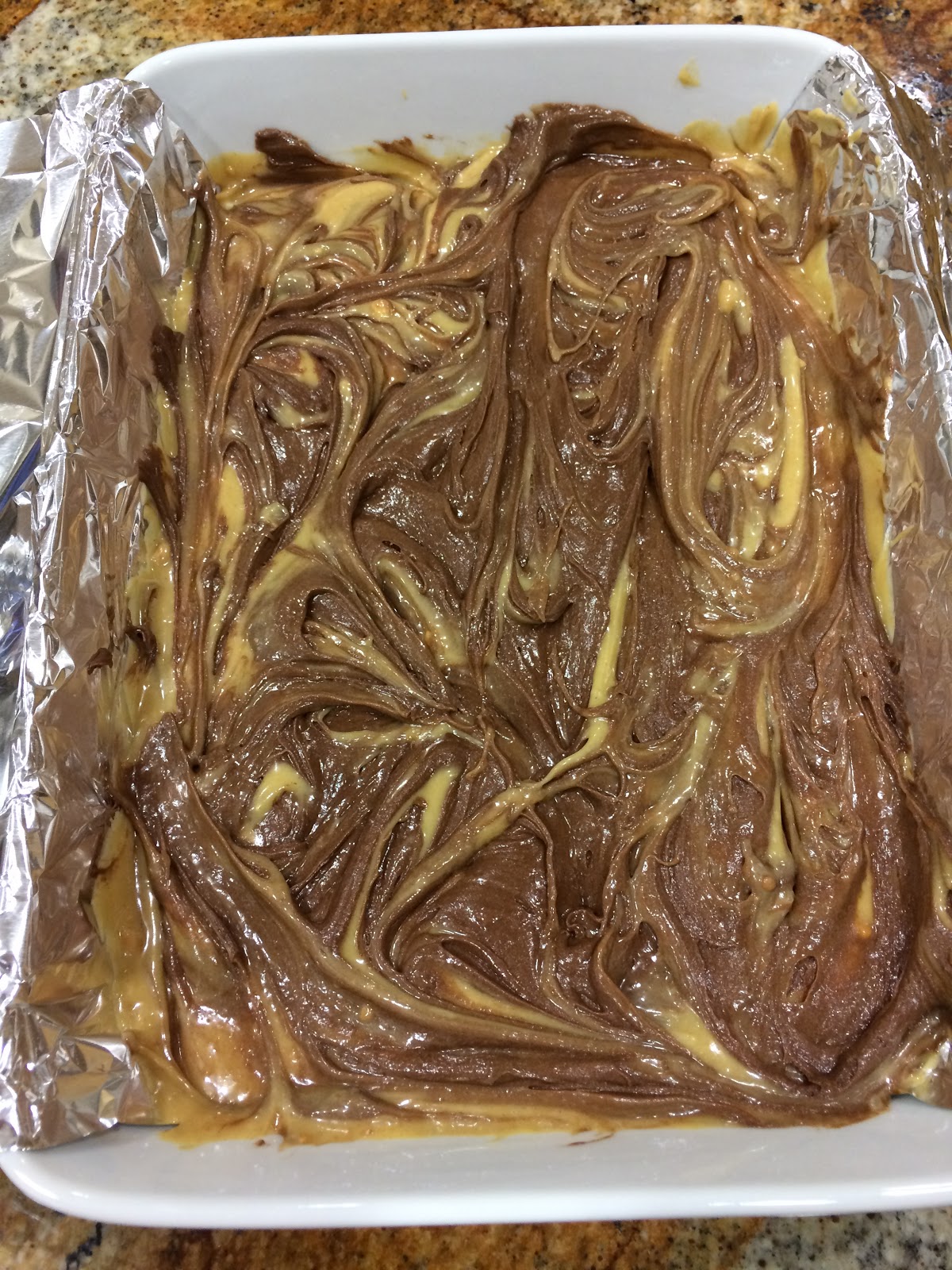 Bake for 45 minutes, and cool in the pan. 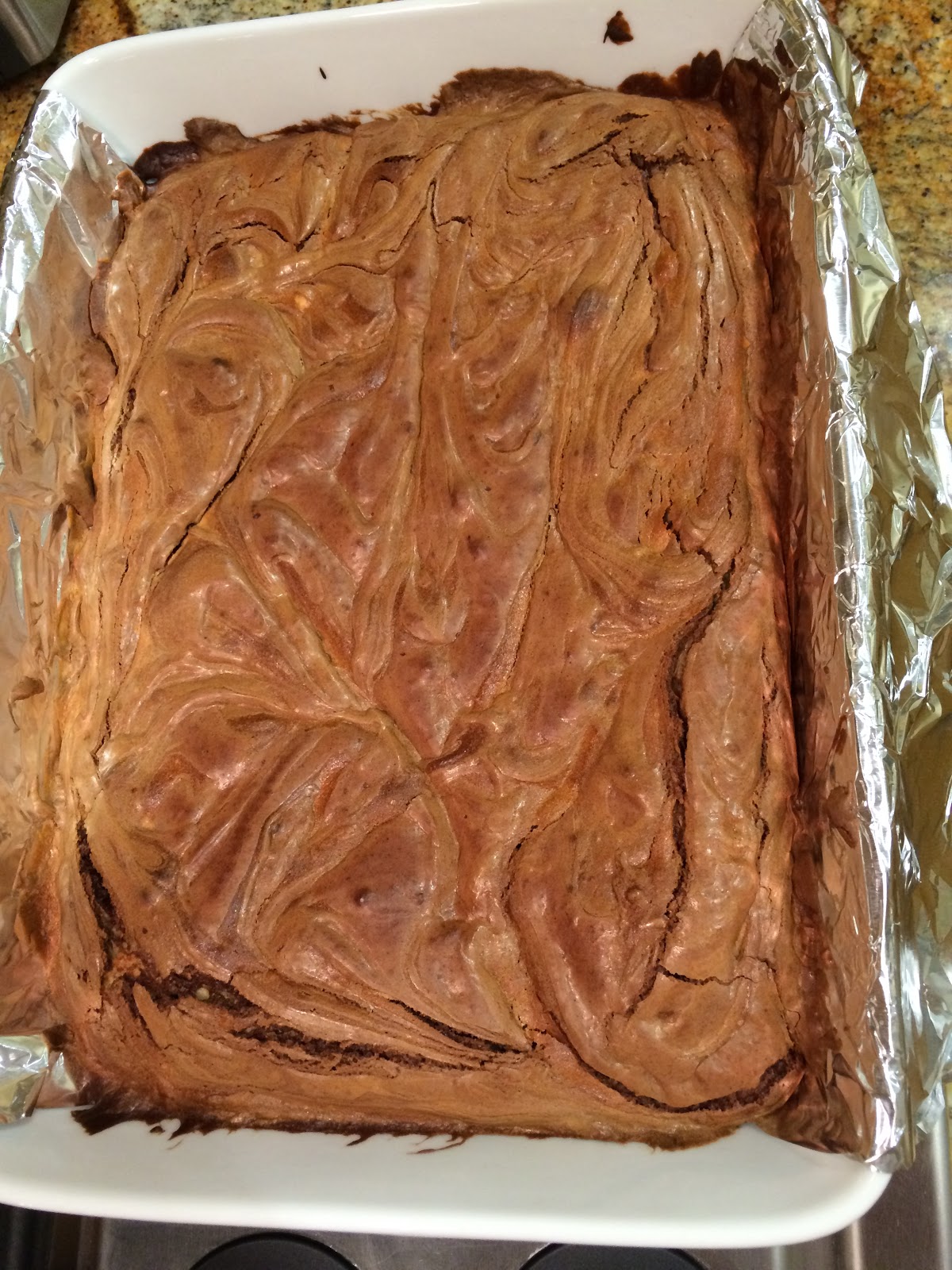 Place the 1/2 cup of chocolate chips in a medium bowl, and set aside.

Heat the heavy whipping cream in a small saucepan until the cream is hot to the touch.

Pour the cream over the chocolate chips, and let it sit for a few minutes.

With a whisk or small spatula, mix the cream and chocolate until smooth and glossy.

Poor over the cooled brownies and spread until even.

Once the ganache has cooled, you can grasp the foil "handle" and lift the brownies right out of the pan!

If you're a peanut butter and chocolate fan, or even a sweet and salty fan, I think you'll love these brownies…and the ganache makes them so decadent! 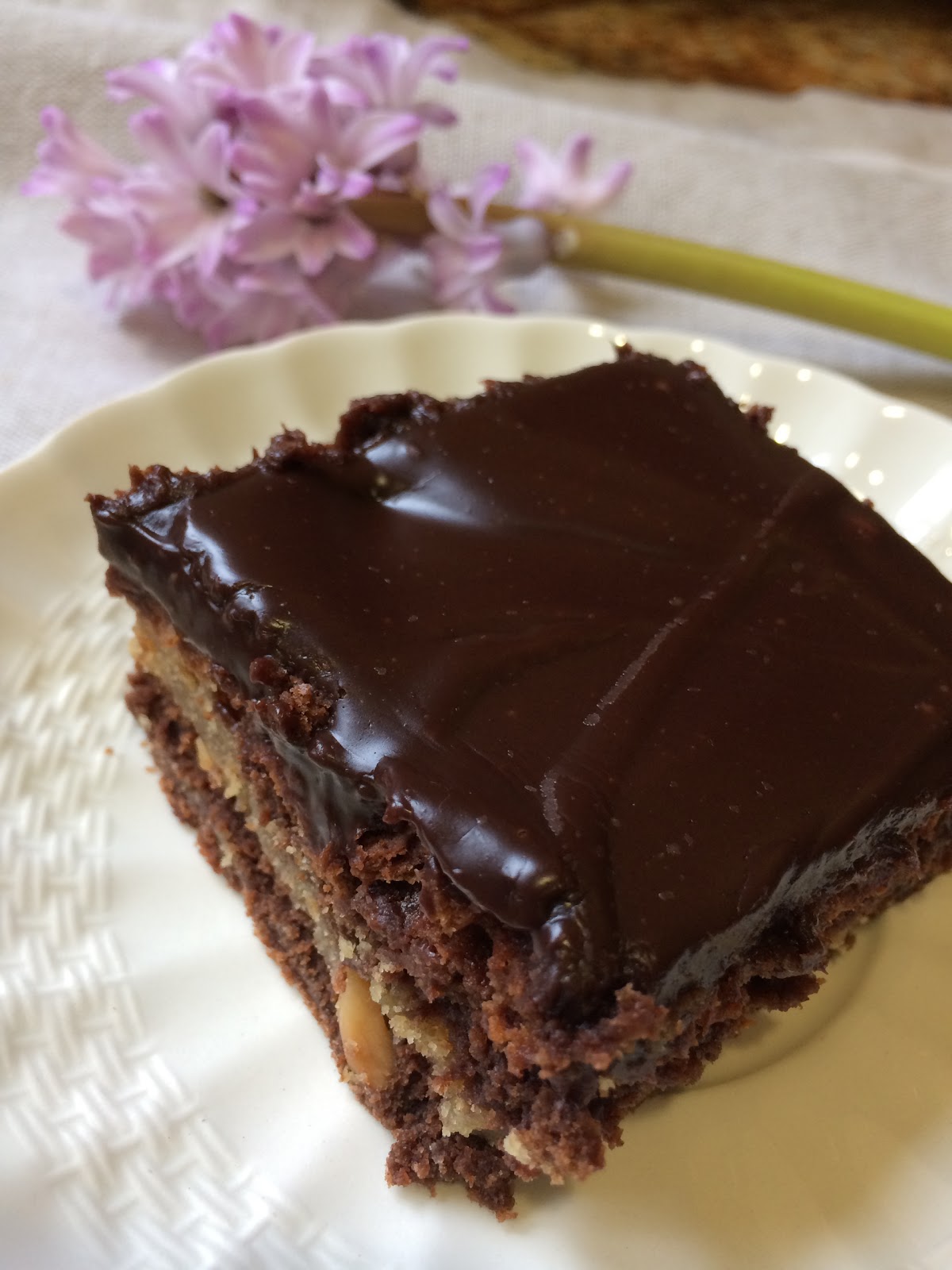